You will need a paella pan – the one on my picture is for 8 people – if you don’t have a paella pan, heavy duty pan will work as well. Preferably with metal holder or removable holder when placing to the oven. Paella is a symbol of Spain for me, and I have a huge respect for it. Every region makes it’s own kind, with their own ingredients. For example in southern Jumilla in Spain I had paella made with escargots only. It was so delicious. Although I am usually not big on following the recipes, preparing a paella,  I wanted to learn it the right way.

I was invited to Costa del Sol’s (Spanish restaurant in Hartford, CT) kitchen and had the privilege to watch Spanish chef making paella step by step. As this family came from the region of Galicia, this is THEIR traditional paella. I wasn’t taking notes but I wrote it down as soon as I came back home. Ever since I respectfully follow these directions. It may seem difficult but believe me, if you take your time and prepare this dish, it is well worth it! The best way is to make paella when your guests are already around, open that good bottle of Spanish wine you saved for a special occasion and cook along – it’s entertaining too!

¼ onion, chopped
¼ red bell pepper, chopped to little pieces
¼ yellow pepper, chopped to little pieces
Few fresh white mushrooms sliced (3-4)
1 chorizo (the original cooking chorizo is available at Costa del Sol store inside the restaurant)
1 pound of chicken breast or thighs (what ever you prefer), trimmed from fat and cut into small pieces ( I love thighs they have way more flavor)
1 pound of extra large shrimps
Clams, mussels (about a pound all together)
pinch of saffron
1 tablespoon of diced tomatoes (or tomato paste)
Rice (Uncle’s Ben’s) (measure 1 cup for 2 people)
Olive oil
1 cups of white dry wine
Chicken broth (2 cups per 1 cup of rice) (watch out – if you are using low sodium broth, you will need to add salt to the dish – don’t repeat my first paella mistake!)
½ cup of green peas (could be frozen)

Start your paella on top of the stove on high heat with quite a lot of olive oil (you will later drain the rest away and can save it for future cooking). Heat the oil, add onion, peppers, mushrooms and chorizo and saute it for a short time on high heat. 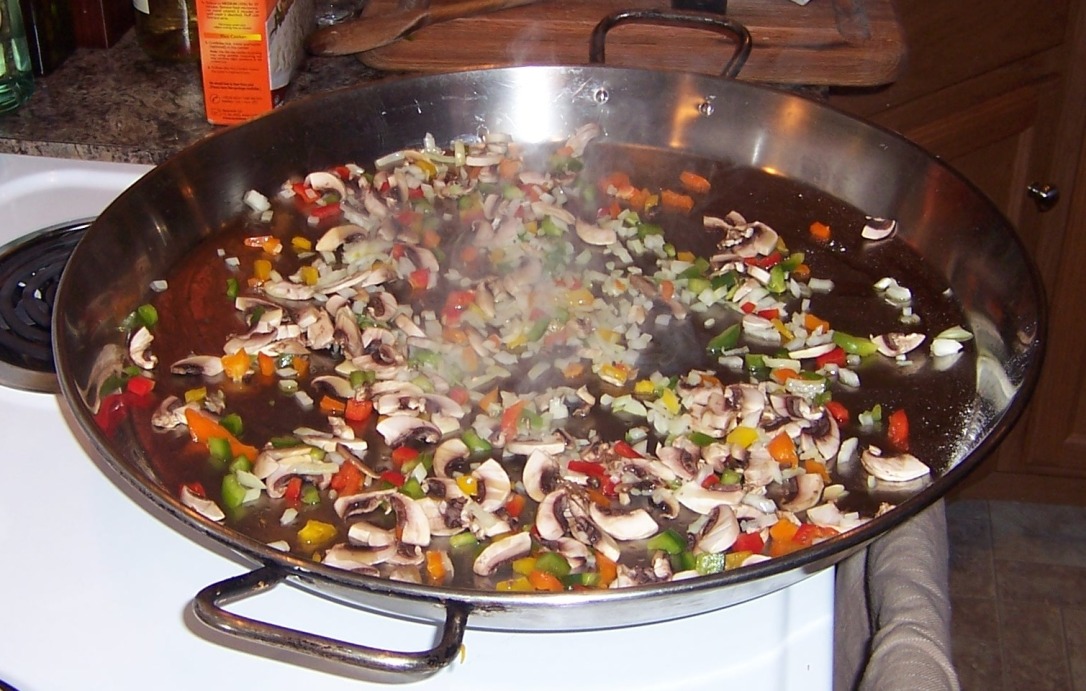 Keep the heat up and place all the chicken to the pan – spread it all over the pan, not in one spot. (I clean my chicken a day before, mixed small cuts of meat, slightly seasoned with salt and pepper with a little bit of olive oil. It could be left in container in the fridge for few hours. The Spanish chef didn’t use salt at all, he said the taste of paella come from the chicken broth.) Today, I use smaller pieces of the thighs – like half of what you see on the picture. It cooks faster and more evenly.

Turn chicken so it is equally fried from all sides. (next time I made it, I cut the pieces of chicken smaller) . Drain most of the oil out, leave just a little (or put a fresh one in), bring heat back up and pour a white wine all over the meat. Sprinkle pinch of saffron to the dish and stir.Spread evenly uncooked rice (1 cup per 2 people) and broth (2 cups per each cup of rice) over the pan. Add a little bit of diced tomatoes (tablespoon full) and stir. Leave it alone for ten minutes. Add clams and mussels to the broth, spread all over the pan.

Let paella cook on low heat for another 10-15 minutes, the rice needs to be cooked for 30 minutes total. When the broth is almost soaked in the rice, add shrimps to the dish, dig it in to the hot rice, sprinkle it with few green peas and put it to the oven (350 °F) for the last 10 minutes. (You can also use your medium heated grill outside and finish paella there under closed cover). When the rice is ready, take it out and cover the pan with clean dish cloth for few minutes for the rice to develop flavors.

Paella is traditionally served directly from the dish – just place it in the middle of the table, add spoons and dig in!Believe me, the best paella experience is the leftover next day – just place your leftover paella in a deep pan, add a bit of chicken broth, cover it up and let it warm up through. Delicious!!!Remember, paella is most importantly a rice dish. All vegetables, chicken and seafood are there just for a taste and color – so don’t over do it! Enjoy!!!!

Wine pairing suggestion:
With this Spanish masterpiece I usually pick my best Spanish red I have on hand. Even though this dish is made of seafood and chicken, the chorizo gives it an earthy flavor. How about spectacular Alto Moncayo Veraton, Old wines Garnacha from the region of Borja?

You can pair this dish with white or red, it’s going to work. For some reason, when I make a paella, it’s a special occassion and I pick the best Spanish wine I have on hand. So I picked an amazing Tempranillo from the Rioja Alta – a single vineyard wine made by Marcos Eguren called Señorío de San Vicente. One of my personal all time Spanish favorites…