We have been traveling through Spain with a group of fellow salesmen, seeing two to three superior wineries a day, tasting the top wines of the region. Every wine lover’s dream.Definitely nothing to complain about except it was 100°F of dry heat and the schedule was really tight. But we loved every minute of it. 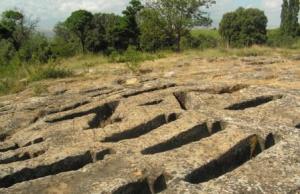 When we arrived at Remelluri estate (the full name: The Granja Nuestra Señora de Remelluri) close to Labastida, in the Rioja Alavesa, it was early morning and we were still tired from the night before.

The village of the same name doesn’t exist anymore, but perfectly preserved burial ground, probably the oldest monument in the region, is still there.

The Granja originally belonged to the Monastery of Toloño, and by the 14th century was independent. They were already cultivating vines and wheat here. At th

e end of 18th century, part of the vineyards were in the hands of Manuel Quintano, the cleric who introduced the wine-making methods of the Medoc to Spain and produced the first Spanish red wines aged in the cask.

What a history! When the current owner, Mr. Jaime Rodriguez Salis, visited this estate back in sixties, he instantly fell in love with the history and the landscape of this place. He decided to bring the vineyards back to their former glory and purchased the estate.

It took him years of hard work in 2,100ft above the sea level (it is considered the highest elevation vineyard in Rioja), replanting the vineyards with carefully selected local varieties as Tempranillo, Mazuelo, Graciano and Viura.

der the Remelluri label was finally produced in 1971. And at the footsteps of beautiful Sierra Cantabria mountains, and on the ruins of the old monastery farms, rose a charming bodega, where Rodriguez family works and lives most of the year. 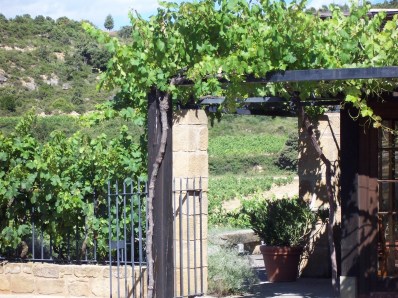 For some reason, the first thing that came to my mind when I saw this estate was Tuscany, Italy. I really don’t know why. It felt very homey, inviting and warm.

Maybe it was the entrance to the vineyards, maybe the chickens in the yard, the vegetable gardens, I don’t know what it was. Hopefully my pictures from this visit can give you some idea how beautiful this place really is.

Mr. Rodriguez wasn’t in such a good mood that morning though. It was probably too early for him too. He wasn’t talking much and his face was frowning. He seemed upset. But what did we know? It could have been his regular face. He welcomed us and we started to tour the vineyards with him. Being a perfectionist as he is known to be, he paid attention to every detail just like when he oversees the daily work of his winemaker, Maria Jose Sagarzazu (as we later heard from her). 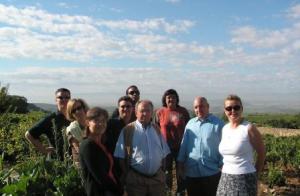 On this picture, Mr. Rodriguez is right in the middle, and his winemaker Maria Jose to the right of him, standing back. Even though she wasn’t tiny, fragile woman, it was obvious who was calling the shots in this bodega. She was very respectful of Jaime and joined us later, when asked to explain the entire process in the cellar.

Every vintage Maria Jose ferments each lot of grapes separately, so each of different lots contributes with its personality to the final blend. When grapes arrive and after the alcoholic fermentation, the wine is transferred into large oak vats, where it’s left for a month for a malolactic fermentation to take a place.

After that is completed, and after several rackings, each of the 22 oak vats are carefully tasted and only the best will be Remelluri. All this labor than finalizes, when the chosen best selection of wine is transferred to oak barrels, where it further ages for two years. Most of their oak is French, about 10% American. Even though the wine is resting and aging, it has to be racked 3-4 times a year. This bodega owns over 3,000 oak barrels – that on its own is a huge investment.

When ready, they refine the wine with egg whites before the bottling.

You think now is finally the time to get it in front of the consumer? Oh no, wine age another year in the bottle before it is released from the winery to the market. A lot of work to make a spectacular wine from a very low yielding vineyards, isn’t it?

We later sat down with both of them and tasted through his portfolio.

During our visit Mr. Rodriguez has already warmed up and by the time, we were tasting his wines together with his winemaker, I could feel his pride to present his latest vintage.

Very rich white blend of Remelluri Blanco,composed of Viognier, Chardonnay, Rousanne, Marsanne, Sauvignon Blanc, Garnacha Blanca and Moscatel del Pais was a wonderful concert of flavors to wake up our palates that morning. Coming from 11 acres of vineyards, some of which are over 50 years old, the wine tasted like premium Burgundy from top cru locations, infused with flavors from all over the world. It was my first time tasting this white wine, since we didn’t carry it in CT at that time.

His Remelluri is composed of 80% Tempranillo, the rest is Garnacha, Graciano and Mazuelo.

This wine is one of the typical “slow wines” I spoke about in my last blog. This is serious blend that needs to age. When tasted immediately after its release, it may be a bit harsh for inexperienced wine drinker. But I just opened his 2001 vintage last night (a great vintage in Rioja), and after an hour of decanting, it was completed as the silkiest, well balanced, totally wonderful red wine with lovely aroma. Aroma that took me back to his cellars. This high quality red has a quite an aging potential.

We finished our tasting with his Colleccion Jaime Rodriguez, best selection of his lots, which they only make 900 bottles of for an American market. Only the highest quality of the grapes goes to this wine and I don’t believe it’s made every single vintage. The price over $ 100 a bottle reflects that. This is a serious collectible for somebody who can appreciate a quality and doesn’t have to have a famous label on each of his case.

Maybe not as well known to the American wine consumer, but his wines are always highly rated. Bodegas The Granja Nuestra Señora de Remelluri was the first winery in modern history of Rioja to only bottle wines from its own estate vineyards.

Unfortunately, there is also a sad story about this family. His son, another talented and famous winemaker Telmo Rodriguez, went his separate ways when their strong egos prevented them from being able to work together. What a potential in this family! 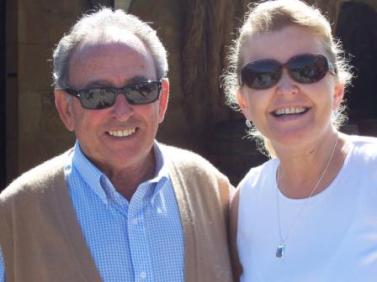 When leaving this charming estate, I asked Mr. Rodriguez if he wouldn’t mind to take a picture with me. His face immediately brightened up. I was the only woman of our group so it gave me some special attention. I stood next to him for the photo and he whispered in my ear: “Are you married?”

It came out of nowhere and surprised me a little. You wouldn’t expect somebody this serious to be playful! At least I didn’t. So I truthfully replied: ” Yes, I am.” “Happily?” He added and at that time my colleagues were openly laughing. I nodded again. That is the only picture I have of Mr. Rodriguez smiling…

When we said goodbye and thanked him for an unforgettable morning, my friend Richard turned to me and said:” Are you crazy? Why did you say you were married??! Look around yourself! Do you realize what is all this? You could have been a Queen of Rioja!” I know, damn it, he was probably right. Well, maybe not. Either way, that “title” stuck with me for a while. What an estate, what a wine, what a man! Who would complain to be surrounded by this beauty and Remelluri wines!