“Did you ever meet her?” my colleague asked me few years ago. We were waiting for a special (invitation only) Newton wine tasting to start, hosted by this amazing woman. “Not yet, but I heard a lot about her,” I replied. “Oh yeah, she is quite a character! You are in for a treat! This lady is incredibly smart, always curious, tough, funny and some people even find her offensive. She sure asks a lot of questions and she is very opinionated. I just love her! And most importantly, she makes amazing wines.”

I was familiar with Newton wines already, now I was about to meet the lady behind them. It

was so exciting. The little I knew about her life story made me curious even more. Su Hua (her Chinese name is pronounced Sue Wa) means serene and majestic – as her parents wish her to be.

Majestic, definitely. Serene – far from reality! Growing up in communist China, life taught her the first tough lessons when she was still a little child. I heard that they escaped (on foot) when she was a child and found her new home in Great Britain. It sounds easy, but it was in fact quite dramatic.

She was raised by then Secretary-general of UNESCO family in London. Today Mrs. Newton is a winemaker, entrepreneur, professor of education, among other degrees she holds PhD in Clinical psychology, study French (in her late 60ties) and many people could hardly keep up with her enthusiasm, energy a hunger for knowledge. Her passion for wine probably started around 1972, when she met love of her life, British Peter Newton. He was already building his, then unknown brand, for eight years in Napa. Together they created one of the most recognized Napa winery. Which brand am I talking about? Sterling vineyards!

When Newton’s sold Sterling in 1977, they purchased 560 acres of land on the western slope of Spring Mountain in Napa. The steepest lots were cleaned and planted with a classic Bordeaux varieties – Merlot, Cabernet Franc, Cabernet Sauvignon and Petite Verdot. Their different heritage blended beautifully at their estate. Dr. Su Hua designed most of the vineyards, Peter’s love for English royal gardens created a combination of gorgeous gardens over the tasting room and through out the property, with Chinese front gates to the vineyard….

To my excitement, madame Su Hua was seated at my table that evening. So I got to observe her the first hand. Just like my friend said, I was really impressed with her personality (as much as with her wines). Yeah, I truly believe that when you find an incredible wine that stands out, most likely there is an incredible winemaker behind it. At least it worked for me so far. She started with a short introduction about Newton winery and asked the audience (mostly professionals, owners of the wine stores and restaurant wine buyers) if they had any question. Somebody asked her how they choose the Spring Mountain vineyard.

“Well, I think it actually found me. I’ll explain: I rode a horse in Napa one day and felt…”she explained, speaking rather quickly with an Asian accent. The audience giggled. “As I am rolling down from this steep hill, covered in mud, I only hoped that nothing will be broken. And when I finally stopped, found out that I was O.K., I looked back up and my first though was – wow, what a hill! I wonder if anybody owns it?! It would be a great lot for a vineyard. So I walked to the first house (accidentally it was one of my student’s) and asked if anybody knew about this piece of land. My student hardly recognized me under the cover of mud. And imagine the coincidence – it was for sale! We purchased it right away…”

Although Dr. Su Hua holds all kinds of degrees, she doesn’t have a formal education in oenology. For the first decade their estate’s winemaker John Kongsgaard, who created a reputation for Newton’s Merlot, thought her a lot. He was a great influence as well as other significant wine personalities, she learned from. Such winemakers as Christian Moueix who “was extremely kind” and taught her “what real Merlot is all about.” She also liked Michel Rolland right away.

Su Hua was never shy. She asked a lot of questions and met some masters of winemaking such as Paul Pontellier of Chateau Margaux, or Vincent LaFlaive, who’s Burgundy completely charmed her. Madame Newton became an excellent self-made winemaker. Her philosophy is the more natural, sustainable approach to the vineyard. She insist on use of wild, natural yeasts in the fermentation process. She likes to avoid sulfur use wherever possible.

One of her hilarious stories that night was about her experience buying oak barrels for the winery. She visited some most prestigious cooper in France and wanted to see his work. French winemaking is still almost exclusively men’s world – so he looked at her and referred her to a stock of barrels to choose from, while he was taking care of some other customers.

“In his chauvinistic mind he thought: ‘An American Chinese? A woman wine maker? These are good enough for her’…”she laughed. We laughed too because knowing her, we knew that it must have been like stepping on her toe. Sure enough. Soon he found her climbing the top shelves where the best barrels were hidden for special customers. I can just imagine her climbing upper shelves with a mirror on a long stick, so she could inspect the inside, shouting questions at this poor craftsman, while he was dealing with other customers.

The cooper asked her what she was doing. And she replied, in front of all his regular customers – “I am not interested in that crap. You can keep those. I want the best barrels I can get.” When she added something unflattering about the stock he offered her, the cooper gave in. Preventing more embarrassment in front of his customers, he agreed on selling her anything she chooses. “Just be quiet, please…” he was begging.

As tough as she was on anybody doing business with her, she was tough on herself as well. She personally supervised hand picking and sorting of the best grapes from their steep Spring Mountain. Newton winery workers were only allowed to pick ripe fruit, that she clearly marked. Which meant up to four or five passes through the vineyard during harvest.

One of her vineyard workers still remembers how she once made him eat premature grapes he picked, using his own judgment and disobeying her orders. She cured him later, but thought him a lesson. By her own words, all her workers are her “kids” but she isn’t kind mama. Fair, but tough. People can call her in the middle of the night that they are in accident and she will take care of them. But respect is something that she gives and expects back.

Fascinated by slow, old-fashioned way wine making, it takes much more time and labor to craft wines her way. The majority of the wines are bottled unfiltered and unfined. “The whole Napa is fermenting already, only Newton wines are not!” she was joking during that dinner. She refused to speed up fermentation process. Dr. Sue Hua also believed that filtering strips the wine of most of its aromatic character. “Filtering is cheating!” she said.

As Ms. Newton explained her winemaking approach, I wasn’t the only one fascinated by her. She undoubtedly captured everybody’s attention. Her true passion for her work corresponded with the respect, she demanded when tasting her wine. “Don’t just drink it like that!” she noticed somebody, who didn’t wait any longer and started to drink on his own. “That’s not how you taste wine. That’s like you were getting ready for 3 hours to go on a date, and than you just saw your love for 3 seconds passing by in the bus…”

I was glad it wasn’t me sipping prematurely. I would hate to be embarrassed in front of her. She was right, her wines demand respect. Especially when you know how much labor went into every bottle. I just had a bottle of Newton Claret over the weekend and it reminded me of that evening and my first meeting of Dr. Su Hua. Today, Mrs. Newton left control of winery to Moet Henessy, who was long time majority partner in her winery. After her husband Peter passed away few years ago, she was running the business herself. It must have been tough on her.

But I doubt Dr. Su Hua retired yet. I am sure she is busy with her beloved students, and spends as much time as possible around wine. I can imagine how she is insisting on certain ways and driving everybody crazy. The wine leaving Spring Mountain Winery, with its lonely pine tree and her name on the label, must be the highest quality possible. She was proven right during 30 years of her wine making. Newton wines were the first unfiltered wines in Napa, and Newton Unfiltered Chardonnay is consistently getting highest scores from wine critics. And for anybody, who say “I hate Merlot” I would kindly ask them to invest in a bottle of Newton Unfiltered Merlot. Most likely they will never say that again!

Robert Parker, about Newton Unfiltered Chardonnay 2003 ( 95 The Wine Advocate):
“This beautiful chardonnay is reminiscent of a top premier Cru from Chassagne-Montachet.” 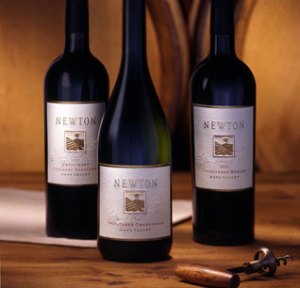 I will follow with a reviews of Newton wines soon. By the way, one of my important wine buyers was offended by Mrs. Newton that evening. “I didn’t like the way she treats people,” he said to me and never bought a bottle of Newton wines again. I felt sorry for him (and my business, of course).

It’s possible that somebody doesn’t appreciate her “brutal honesty”.
I, on the other hand, found myself quoting Dr. Su Hua often. Her life philosophy made a lot of sense to me. There is a lot of wisdom in this majestic lady.