I just recently read an article about an Austrian innovator Markus Bachmann – who believes that one of the key ingredients for red and white wine is music. This gentleman believes that music improves the aging process of his wines, developing better taste profiles and age worthiness.

For that reason, Mr. Bachmann has invented a special device that exposes fermenting grape juice to classical, jazz or electronic tunes.As the article claims: “Werner Gruber, a University of Vienna physicist and member of a group known as the Science Busters, which aims to debunk false scientific claims, rejected Bachmann’s idea as “rubbish.”

“Yeast, fungi, don’t have opinions,” Gruber said. “They really don’t care if AC/DC, Madonna or Mozart is played to them.”

But 44-year-old Markus, who also managed bars and restaurants and worked for an air conditioning company, is highly protective of his sound-infusing gadget, that he inserts directly into the fermenting grape juice to stimulate the yeast.”The wines get more fruity, they get mature earlier,” the former french horn player said in a recent interview. “All the tastes, flavors stand alone much better.”

Bachmann theorizes that the sound waves emanating from his speaker move yeast particles around and, among other things, cause them to eat up greater amounts of sugar, resulting in a wine that has a lower overall sugar content.
“There’s an absolute scientific basis for it,” Bachmann said.”

I don’t know what’s your opinion, but this Austrian winemaker is hardly the only one  with such an idea. There are many others known for believing that music could improve the quality of their wine. (and perhaps, not just wine).  There could be even more of those who are practicing it without anybody else knowing.

I have personally met two, significant and respectable producers that have a similar approach when it comes to music.

For example, Alois Lageder in Alto Adige, (Lageder family makes wines in Italy for over 150 years). He is not just one of the most significant wine producers in the area, he is also considered the most respectable entrepreneur, whose high standards of working in complete harmony with nature became a standard that many others strive for.

Together with his sister and brother-in law, they believe that creating extraordinary wines demands serious attention to all details. From unique terroire (his wines are located at the footsteps of gorgeous Alps, some on the steep slopes, elevated high above the sea level), through year around work in the vineyard, low yield, selection of best grapes, the most natural possible handling in the winery itself – to the vinification process, using the most technical and innovative methods yet always highly respecting the environment.

Yes, there is music being played in this winery as well. I don’t remember which classical pieces Mr. Lageder said were played to what grape varietals, but they do. Just during the fermentation process. Wine than ages in a quiet and peaceful environment of their old, natural cellars, to mature to perfection. I don’t believe that anybody would laugh at this idea during Mr. Lageder’s much sought after wine seminars.

Another very impressive gentleman, I met few years back, was a tequila producer and restaurateur David Suro – Piñera. 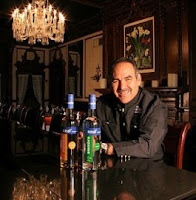 out tequila (it all taste the same, doesn’t it?) this meeting was an eye opener. Yes, there is music being played in this winery as well. I don’t remember which classical pieces Mr. Lageder said were played to what grape varietals, but they do. Just during the fermentation process.

No wonder, Mr. Suro-Piñera was appointed by Mexican government to teach about tequila around the world. His beautiful Los Catrines Restaurant and Tequila Bar in Philadelphia has more than 150 different kind of tequilas on the bar. All of them 100% agave. Did you know that growing agave is very similar to wine? That there also are the best terroires for growing agave, to make the finest and the most unique tequila? I didn’t.

David Suro-Piñera started to produce his own tequila Siembra Azul because he wanted “to fight against the stereotypes of tequila.” He appreciated how complicated and delicate this spirit really is. The truth is, after his seminar I became a tequila lover myself.And guess what? They play Vivaldi and Mozart music for tequilas, prepared by master tequila distiller Leopoldo Solis, during the fermentation process! When asked why, he politely answered: “Yeast suffers stress, the same as the humans.”

David Suro-Piñera admitted that his own eyebrows rose a little first, when his master tequila distiller told him that the importance of particular music was almost the same as the choice of agave he had to work with. He wasn’t convinced until they let him taste the products, side by side. One fermented without the music, and the other prepared with the assistance of beautiful, calming tones of classical composers. He couldn’t believe the difference.

Mr. Suro-Piñera hired reputable tequila master Leopoldo Solis as part of his cabinet of tequila advisers, which also includes tequila academics (yes, one can become a professor of tequila), authors and engineer gurus, to oversee the production of Siembra Azul. That’s how serious he is about his tequila.

So is it all joke? I don’t believe so! If somebody is going through so much trouble to accommodate either wine grapes or agave, you can be sure that he is paying attention to every little detail. If they are passionate enough about their work to even risk that somebody might make fun of them? Who is to judge? Let them play violoncello in the cellar, if they believe that’s what their wine needs! I truly believe it could be a recipe for extraordinary.

There are some voices who claim that it’s all non sense, not supported by  any respectable research and it’s probably just good marketing. Yeah, I am not surprised, in today’s cynical world. Music is an ingredient you can’t measure or weight. Why do you think Italians say that love and passion are the most important ingredients of their cooking? And look how far it got them!

2 thoughts on “Can playing music to grapes improve the quality of the wine?”