Sorry for being behind in my blog lately, I was extremely busy with something else. And, now it’s over! I am talking about our Spanish wine course. I have to admit – it was quite a ride! I loved to meet some new wine enthusiasts that were into Spanish wines, just like I am. And perhaps some that weren’t, but slowly became? I hope so!

It all started with a big presentation I did for American Wine Society in February of this year.

The invitation got me excited and worried at the same time – you know, talking to people that are making wine themselves, could be a challenge.

I have a huge admiration for that hard work, but don’t know enough about all the technical aspects of wine making to hold an appropriate debate in that field. But it wasn’t about that at all. It was about wines of Spain – my big passion. The group of AWS members was truly great, and we spent quite a time together.

It took us 4 hours to go through major wine regions of Spain and to taste about 16 wines. Sure, part of it was breaks to taste the delicious food they brought, and also the fact that they asked a lot of questions. Not that I knew the answer to every one of them, but I tried. That’s what mad

e it so exciting!

Every special question offered another point of view for our debate. Just imagine yourself talking about subject that interests you – and having no response from the audience. And now imagine the other possibility – having audience completely interested!

It also made me work harder to research all the technical aspects of each wine, sugar and acidity levels, Ph, what temperature it was fermented at, etc… stuff that you normally don’t need for “regular wine tasting”. It was a great moment when I realized that we clicked, we were on the same page. 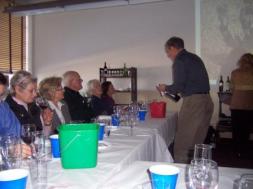 I guess my ego also got a boost (especially that standing ovation at the end, don’t mean to brag about it). I have worked home for way too long, creating stuff without direct feedback. And every one of us needs some occasional patting on the shoulder.

So when some members of our wine club asked me to do something similar for Vera Wine Club, I thought: why not. I can put some new use to all those hours of research.

But I didn’t want to repeat the same, lengthy presentation. It could be overwhelming for somebody, who doesn’t taste a lot of wines on regular bases. At the same time, which wines would I cut to make it shorter?  The presentation was designed to taste most of the Spanish native varieties, and almost every significant wine region of Spain.

So instead of cutting, I came up with the project of 3 wine classes. Something that wouldn’t be as expensive as wine dinner, but gives people the chance to taste a large variety of wines. And so I did.

To conduct such a tasting in the best possible manner, each class was covering few regions of the Spanish map. Started with the coolest parts, we were moving towards the southern, warmest climate.

Patrick Mata and his business partner Alberto Orte (owners of Ole Imports) had done years of research on multiple climates of Spain. They considered the soil, the elevation, the exposure to the sun, the rainfall and many other little aspects that influence vine growing, and split Spain into 10 different climate zones. The higher the number of the zone, the less acidity the wine from there has.

Most of us know that when you do a tasting, you start with whites and continue with reds, or you taste older wines before younger, brighter wines. But what do you do, when you  taste 10 reds, all the same vintage, all Spanish – how do you decide on the sequence of such tasting?

That’s when the levels of acidity in wine comes to play. So I used Patrick’s and Alberto’s “Liquid geography” principle to conduct our wine classes. Thank you, guys, for putting this fantastic piece of research together, and for letting me use it!

The first trip (I mean the first class) we took, brought us to ….. continue