Never heard of Clio? I wouldn’t be surprised. This wine doesn’t have such a long reputation as for example Caymus, Spottswood, Silver Oak, Chateau Latour or similar “high end superb collectibles”. In fact, history of Clio is not even a decade long. Yet, it created quite a wave right after its first released vintage of 2002.

Clio is a spectacular red wine made by Bodegas El Nido in Jumilla, Southern Spain. It is a team work of Gil brothers (famous winemaking family, involved in several successful wine projects throughout the Spain), Jorge Ordóñez (in my opinion the top importer of Spanish wines to the United States of America) and famous Australian winemaker Chris Ringland. 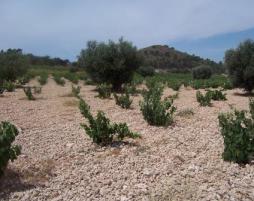 The blend of 2007 vintage was sourced from 32 years old vines of Cabernet Sauvignon (30%) and 76 years old vines of Monastrell (70%). If you are lucky enough to get it, the price averages about $ 40.00 per bottle. So why is this wine so passionately sought after by wine experts?

Is it the outstanding quality, old vines, the terroire, rapidly changing temperatures, not enough rain, aging potential, very limited availability, high scores and reputation, the extensive manual work in the vineyards, the winemaker? What is it that makes it so special? All of the above!

When I visited the vineyards of Clio and El Nido, I was shocked. The first thought that came to my mind was: this wine is too cheap! How could anybody make a living? (take it from somebody, who constantly complains about overpriced, over-marketed wines that are not worth it).

The picture you see, is not a desert – it is an actual vineyard. You can not see the soil because it is covered by stones up to who knows how deep.

One can only imagine what the roots of these vines have to go through to reach any nutrition and water.

So, what’s so special about Clio?

A very interesting lady winemaker once told me that wine is just like people. The more struggle, problems and stress it experiences during its time, the better fruit it develops. Just like we become better people through our own struggles. Yes, it is proven truth.

Bodegas El Nido’s Cabernet and Monastrell are harvested continuously, within 4-5 weeks, as they ripe. The already low yield was pruned down during a green harvest (when clusters were eliminated to 1-2 per vine to develop the most concentrated flavor). When the harvest begins, workers will pass through each vine several times, to pick the most mature brunches only, and leave the rest to develop more.

(Just to have some prospective on the yield – a typical high end Cabernet in California, priced $ 100.00 and more per bottle – would average about 6-8 clusters per vine. And that’s considered “a boutique style winery”).

Their excessive work goes even further – harvesting into very small baskets so the grapes wouldn’t bruise, press and lose some precious juice. This is followed by another selection at triage tables at the winery – where they only pick the healthiest, ripest grapes.

After that the wine ferments in open small vats for 7 days. The grapes are than basket pressed and fermentation is finished in oak barrels. New French and American oak barrels are used for a second, malolactic fermentation. Each variety age in oak separately and the blend is made at the end, after tasting every barrel by Chris Ringland and rest of winemakers of Bodegas Juan Gil. They pick and choose what will go to the final blend. When all this is finished, wine quietly ages for 26 months in new oak.

“And than Jorge Ordóñez comes, and tastes every single barrel separately…. and eliminates about the half of it,” smiled Miguel Gil, explaining us about the whole process. I don’t know about you, but I truly believe that this wine deserves a super special attention as it was given such a special care.

Considering how old the vineyards are, this is a very modern, exciting wine with a great aging potential. And I am sure it’s only beginning! If you are lucky to get your hands on some Clio, do not think twice. You will be rewarded!